A royal source tells ET that the diamond eternity ring Meghan was snapped wearing on Saturday along with her wedding band and engagement ring at the Trooping of the Colour parade in London, England, was an anniversary gift from her husband.

An eternity ring symbolizes never-ending love, and is usually given by a spouse on the occasion of a significant anniversary. The couple celebrated their first wedding anniversary on May 19.

The Trooping of the Colour parade — the Queen’s annual birthday parade — marked the first royal event Meghan has attended since giving birth to her and Harry’s first child together, son Archie, on May 6. The Duchess of Sussex looked amazing as usual in a navy Clare Waight Keller for Givenchy dress and overcoat, which she paired with a matching Noel Stewart hat. Along with Harry, Meghan shared a carriage with her sister-in-law, Kate Middleton, and her stepmother-in-law, Camilla.

A royal source told ET that she wanted to be in attendance as “the Queen’s birthday celebration is a family event. The Duchess of Sussex is still on maternity leave, but this is a family moment with the wider members of the royal family all in attendance.”

A source also recently told ET that Harry and Meghan have been cherishing their first month as new parents. Harry wants to be as “involved as possible,” the source shared, and, like every parent, he’s feeling the effects of the sleepless nights, feeling exhausted but enjoying every minute of it.

Meanwhile, “Meghan is radiant, taking each day one day at a time,” the source said.

For more on how Harry and Meghan sweetly celebrated their first wedding anniversary, watch the video below: 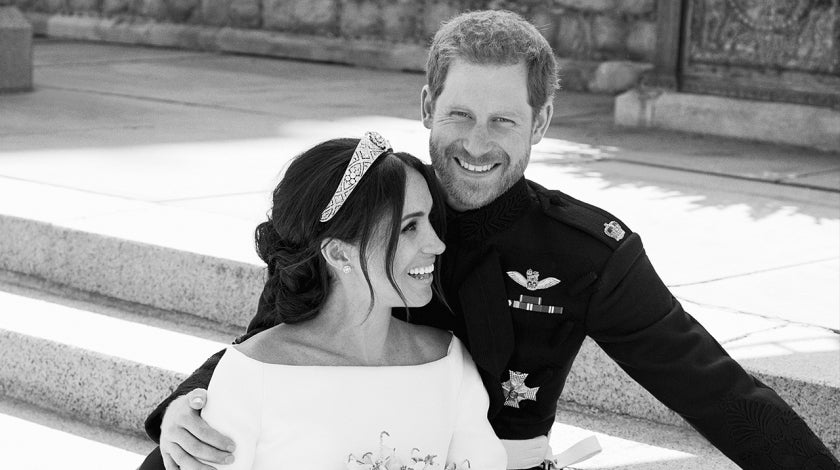