Kelly Clarkson didn’t score a nomination for the 2020 GRAMMY Awards — but she’s covered plenty of this year’s nominees on her talk show!

The singer, Voice coach and TV host — who boasts 15 GRAMMY nominations and three wins to her name — was only eligible this year for her UglyDolls single “Broken & Beautiful,” but she has been honoring other nominated artists in her own way, with “Kellyoke” covers every day on her eponymous daytime show.

Without even knowing it (or perhaps she’s just that savvy), in the months since her show has been on the air, Clarkson has covered a good number of the biggest 2020 GRAMMY nominees, putting her own spin on chart-topping hits, iconic classics and lesser-known bops.

Scroll through to check out the “Kellyoke” versions of this year’s honorees, and check out our definitive ranking of the singer’s best talk-show covers to date here!

The undisputed queen of the 2020 GRAMMYs so far, Lizzo has the most — with eight total nods — and the biggest, earning nominations in each of the “Big 4” general field categories. Clarkson covered her hit, “Juice,” back in September, and we wouldn’t be surprised if there are more Lizzo appearances coming to “Kellyoke” in the future.

The happiness continues for the musical brothers’ well-received reunion, as they scored a GRAMMY nod for Best Pop Duo/Group Performance for their comeback single, “Sucker” — marking their first recognition by the Recording Academy since they were nominated for Best New Artist back at the 2009 GRAMMYs. Clarkson covered the track in September, and has also performed “Kellyoke” versions of Nick’s solo hit, “Jealous,” and Joe’s DNCE track, “Cake by the Ocean.”

The pop superstar was snubbed out of another Album of the Year nomination for Lover, though she did land nods for Best Pop Vocal Album, Song of the Year (for “Lover”) and Best Pop Solo Performance (for “You Need to Calm Down”). In her “Kellyoke” rendition earlier this month, Clarkson paid tribute to Swift’s previously snubbed 2018 album, Reputation, performing a slow-burn cover of “Delicate” that proved once again that the song deserved more credit than it got.

One of the most surprising “Kellyoke” slam dunks thus far, Clarkson’s rendition of “Better Now” last week brought the fun-loving rapper’s breakup anthem to an unexpected new level — the true mark of a great cover. Posty was nominated for the track in 2019, but lost out to Lady Gaga in the Best Pop Solo Performance category. For the 2020 awards, he’s up for Record of the Year and Best Pop Duo/Group Performance for his Into the Spider-Verse earworm “Sunflower” with Swae Lee.

After making the awards season rounds with “Shallow” earlier this year, Gaga will be back at the GRAMMYs in 2020 with the rest of the Star Is Born soundtrack (learn more about that eligibility weirdness here). Mother Monster — or Ally, as we should still call her — landed a Song of the Year nod for “Always Remember Us This Way,” and Best Song Written for Visual Media for “I’ll Never Love Again,” however, the full album missed out on Album of the Year — earning a nod instead for Best Compilation Soundtrack for Visual Media. Clarkson’s kept it old school with her Gaga covers so far, sticking to a “Bad Romance” rendition back in September — though we’d love to see her have Bradley Cooper on the show for a “Kellyoke” duet.

One of the most romantic revelations of nominations morning, Mendes and his lady love, Camila Cabello, scored a nomination together, for their steamy duet, “Señorita,” which was nominated in the Best Pop Duo/Group Performance category. Clarkson made impressive work of the Canadian pop star’s hit, “If I Can’t Have You,” back in October, perhaps predicting his paired-up appearance on the GRAMMYs list of honorees!

Carlile brought the GRAMMYs audience to their feet earlier this year — and surprised many with general field nominations for her stellar 2018 album, By the Way, I Forgive You. (Clarkson dug into the archives for this 2007 track, though we’d love to see her cover “The Joke” as well.) She’s nominated in 2020 for her talents as a songwriter — contributing to Tanya Tucker’s “Bring My Flowers Now,” which was nominated for Song of the Year as well as Best Country Song — as well as her duet with Highwomen bandmate Maren Morris, “Common,” which earned a nod for Best Country Duo/Group Performance.

Reba McEntire – “Why Haven’t I Heard From You?”

McEntire is a country legend with 13 GRAMMY nominations to her name, though this “Kellyoke” cover seemed to just be a personal fave for Clarkson (who has family ties to Reba, so, you know, no pressure or anything). After a show-stopping performance at the CMA Awards last week, McEntire earned her second career nomination for Best Country Album — for her latest offering, Stronger Than the Truth — and we’re sure Clarkson will be there rooting her on in January.

This track by the Australian electronic producer is one of more eclectic “Kellyoke” selections, but it shows just how well Clarkson and her team are tapped into different areas of the music scene. “Never Be Like You” was a sleeper hit of 2016, scoring a Best Dance Recording nod at the 2017 GRAMMYs. In 2020, Flume is nominated again, in the Best Dance/Electronic Album category, for his latest mixtape, Hi This Is Flume. 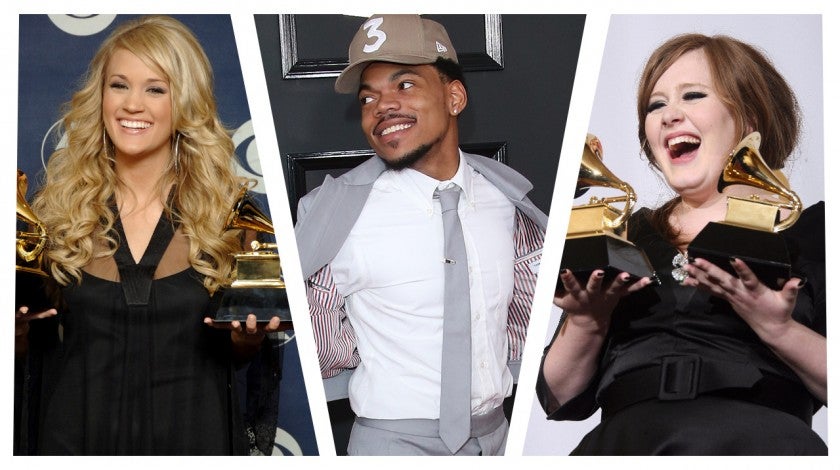 GRAMMYs: Look Back at the Best New Artist Winners